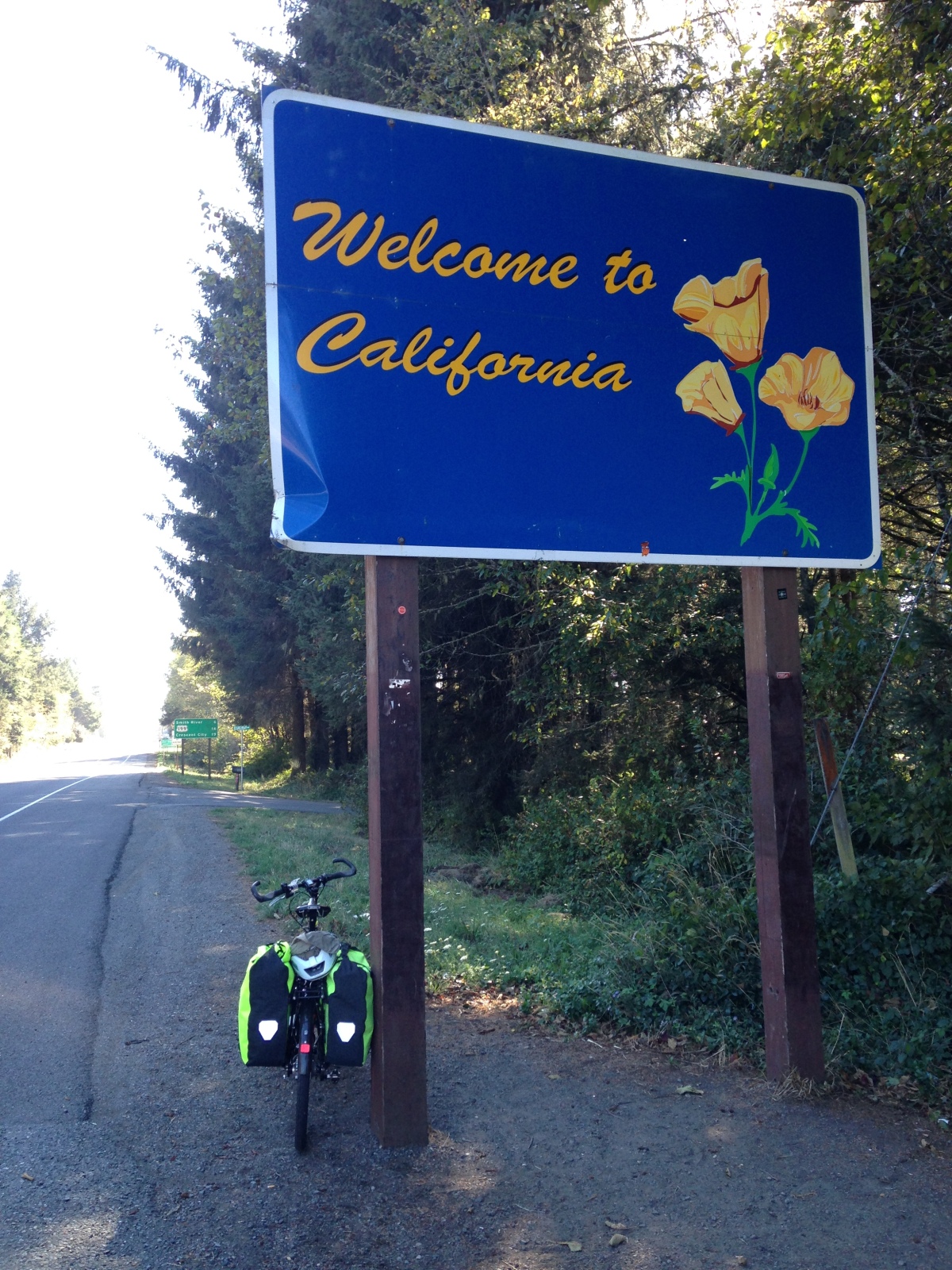 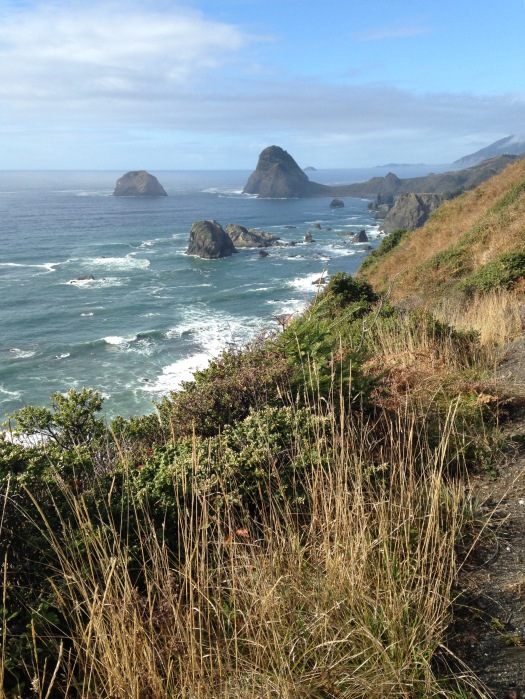 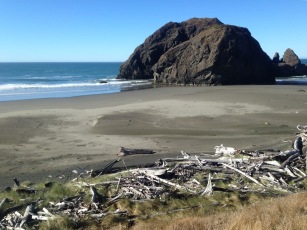 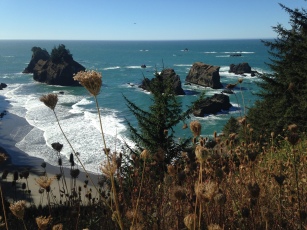 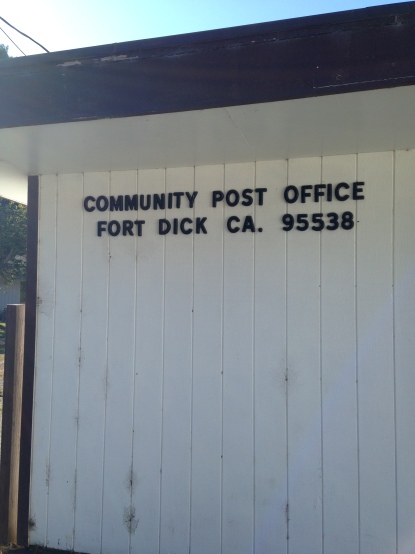 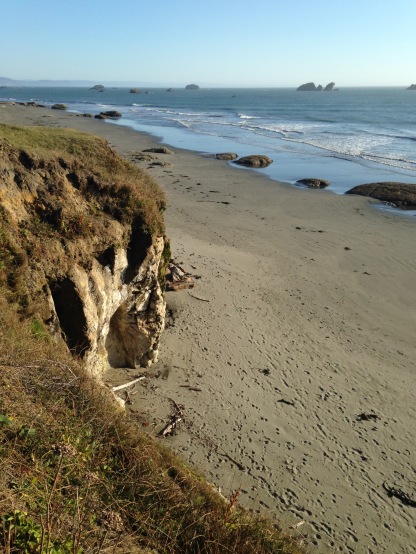 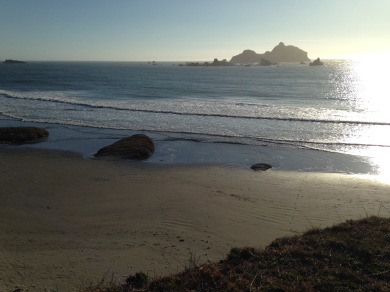 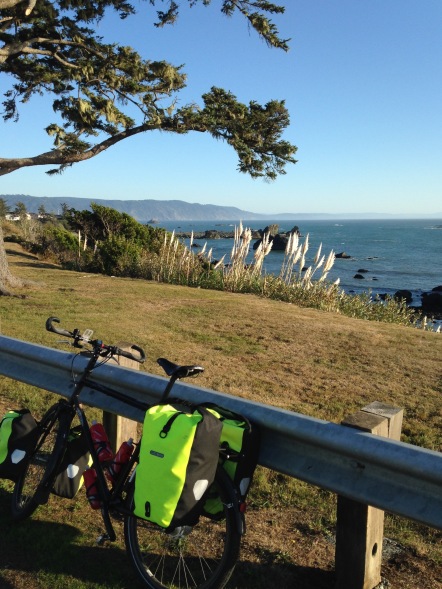 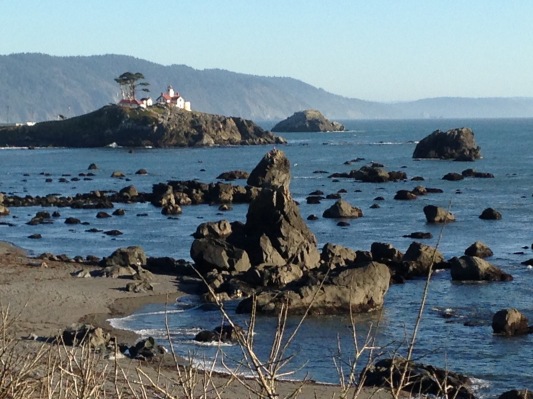 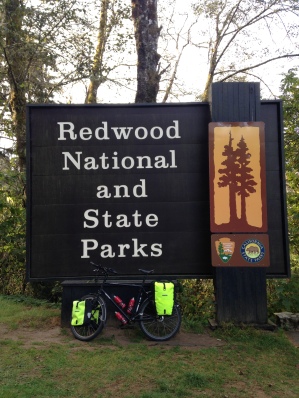 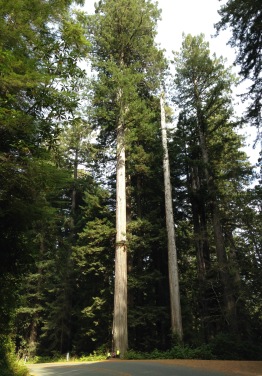 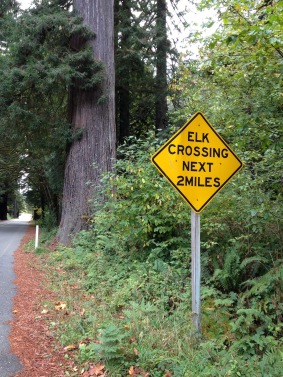 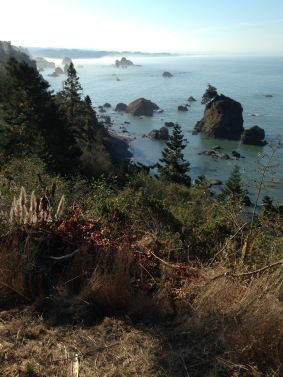 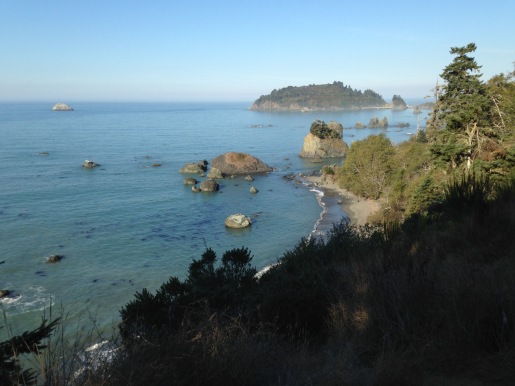 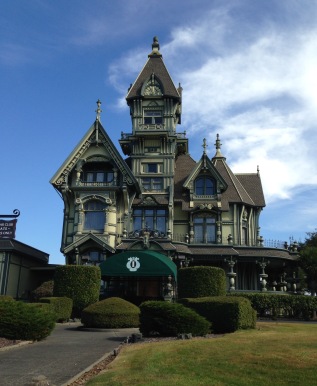 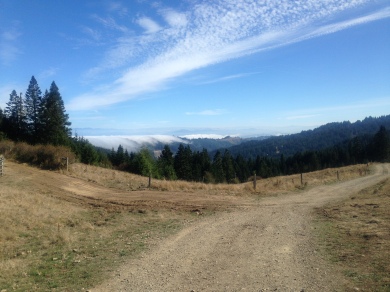 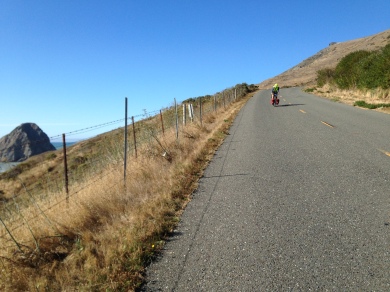 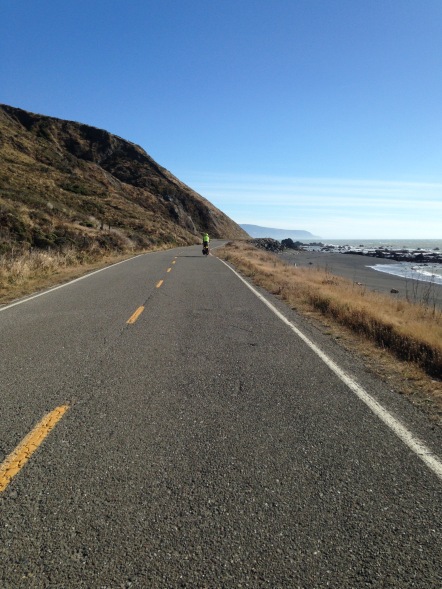 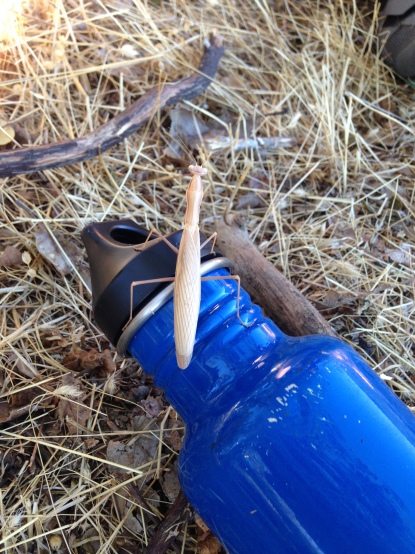 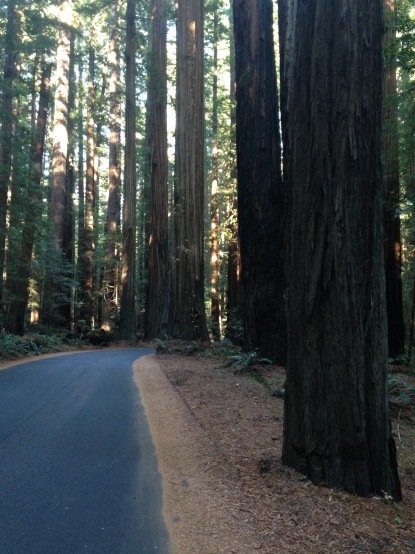 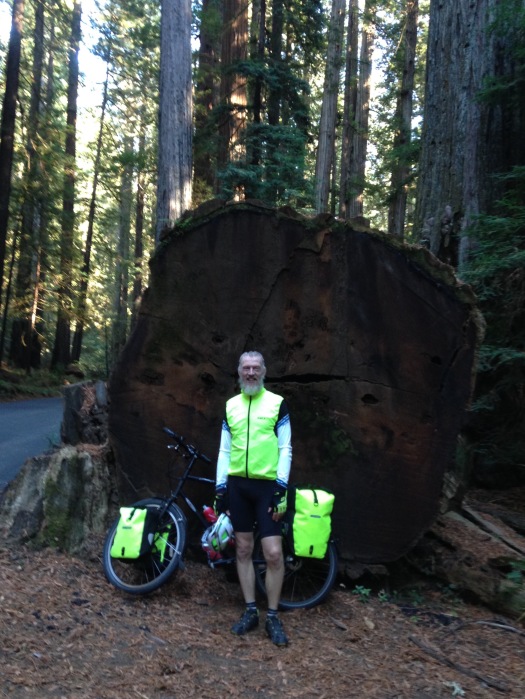 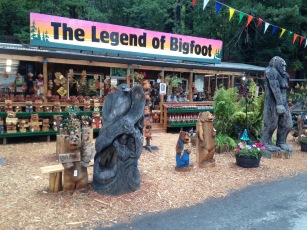 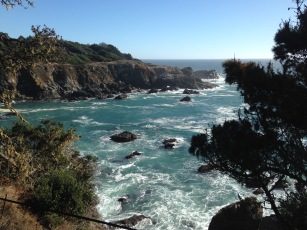 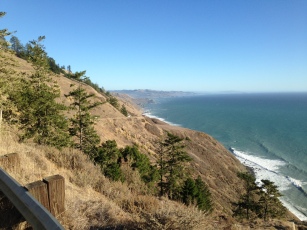 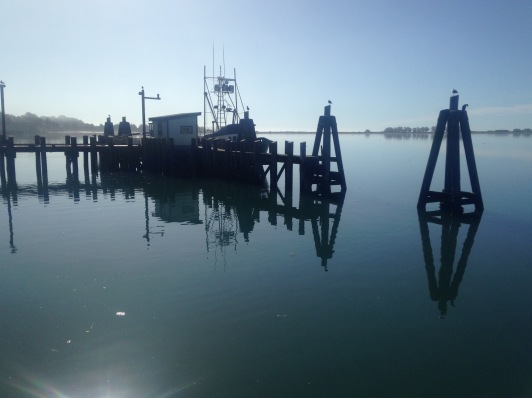 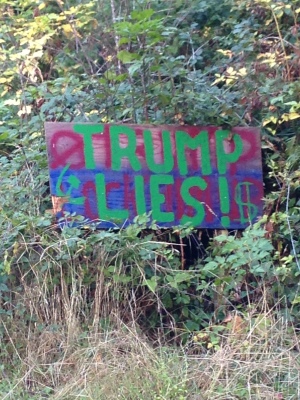 Leaving the Beaver state behind, I crossed into California in beautiful sunshine and arrived at Fort Dick 😉 (I swear I’m not making these names up.) It felt about 10 degrees warmer too. Shortly afterwards, I entered Redwood National and State Parks. The Pacific coast is often hilly and mountainous, so I had a climb ahead of me from sea level to well over 1000 ft. From my uphill perspective, the trunks of the redwood trees seemed massive. Even craning my neck, I could barely see their tops. Redwoods are the tallest living things on the planet. To give you an idea of the scale, look for my bicycle at the foot of the tree in the photo. That tree is actually a relative youngster. Redwoods can reach heights of over 350 ft, which is longer than a football pitch.

Despite the warm sunshine, the nights were chilly. I love camping in the redwood forests, so I broke out my camping gear all the same. Good job I didn’t bother packing my negligée, as the night was so cold that I ended up pulling on everything I had with me. Having finally got warm, I was woken a short time later by an insistent rustling. I lay half-awake listening to it for a while until I realized that the rustling was inside my tent! Switching on my flashlight, I saw a raccoon searching my front pannier for the walnut and cranberry scone that I had stashed there earlier that day. Clearly a discerning raccoon, nevertheless one that didn’t take “No” for an answer. It returned three times until it was convinced that there was nothing to be had. I had no intention of sharing my scone with him. As I always say, “A pleasure shared is a pleasure halved.”

As I headed south along the Pacific coast, cycling from one headland to the next, with climbs of near to 3000 ft followed by exhilarating descents, the spectacular vistas that unfolded around each bend helped to distract me from the increasing pain that had started in my mid-back as a small twinge a few days earlier. By the time I crossed the Golden Gate Bridge in San Francisco, I was in such pain that I could barely sit down on the saddle. A doctor’s visit the following day, plus MRI and bone density scan, revealed a compression fracture in my spine. Not only that, it showed that I’d had three previous fractures — all likely caused by something else that the scan revealed — osteoporosis.

So injury stopped play. Sounds more butch that way. I’m going to take inspiration from that raccoon and try again — probably next spring. For the heck of it, I’ll start the remaining stretch from San Francisco to the Mexico border from the doctor’s office 🙂

Aspiring gentleman of leisure in San Francisco, who fancies himself to be a trust fund kid swapped out at birth. Not dented by the male menopause and a pesky diagnosis of leukemia, this former strawberry blond cycled across America, coast to coast, in 2016 and is presently cycling from Vancouver, Canada, to the Mexico border. View all posts by CL Mackay

2 thoughts on “Things That Go Bump In The Night!”

Aspiring gentleman of leisure in San Francisco, who fancies himself to be a trust fund kid swapped out at birth. Not dented by the male menopause and a pesky diagnosis of leukemia, this former strawberry blond cycled across America, coast to coast, in 2016 and is presently cycling from Vancouver, Canada, to the Mexico border.